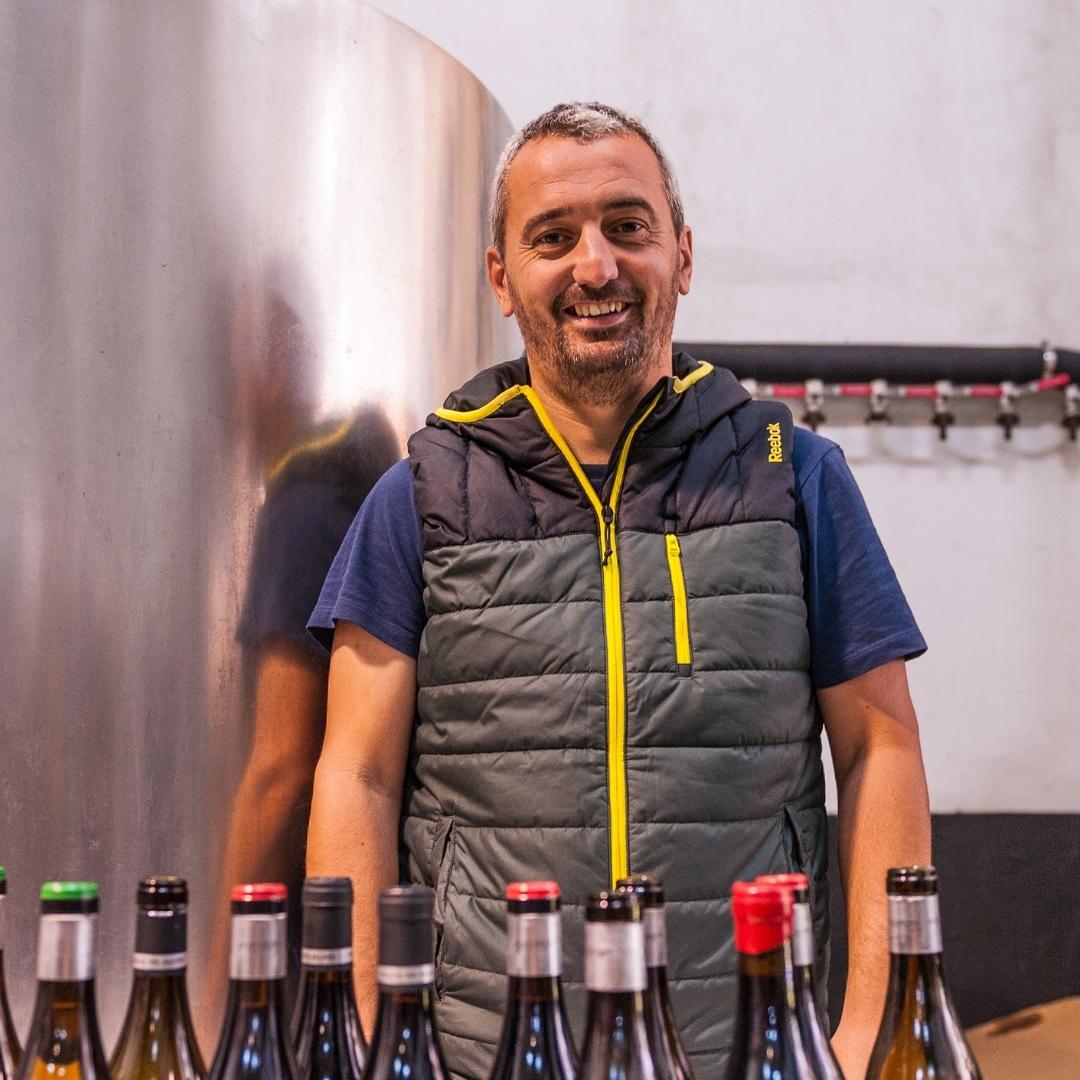 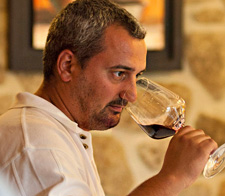 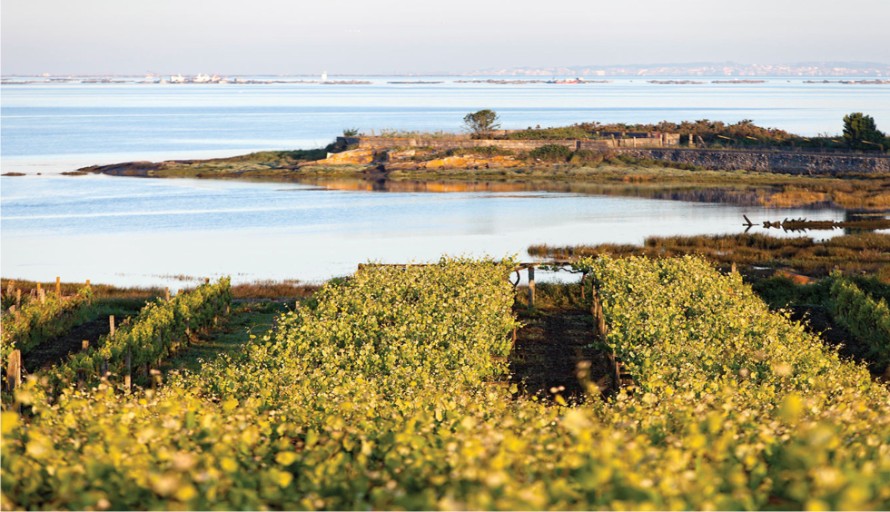 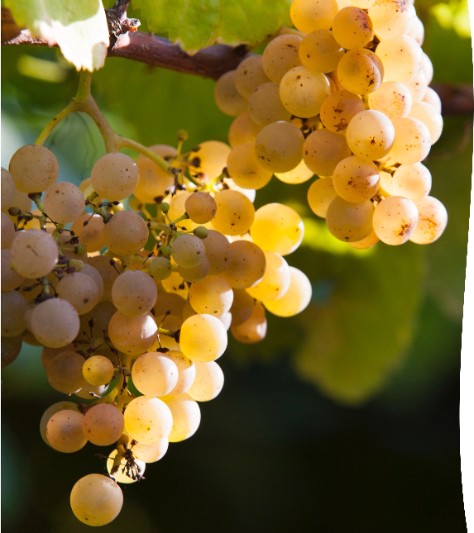 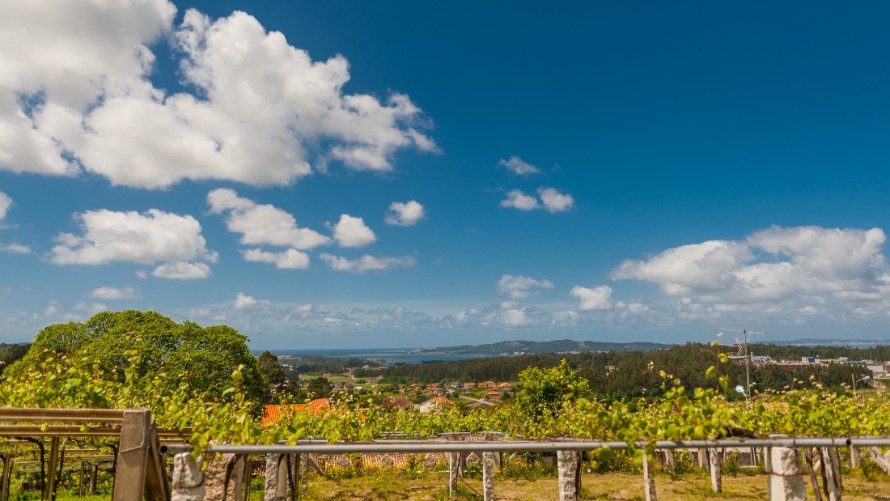 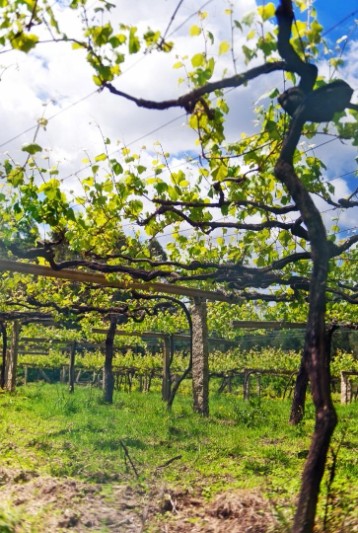 Rodrigo Méndez of Bodegas Forjas del Salnés is the fifth generation of a legendary Galician family known for crafting quality wines for over three centuries. Today, Rodri (as he is known locally) is considered one of the greatest and most prolific Albariño producers in the world, making at least 18 different bottlings at his small winery established in the cradle of the Albariño grape itself: the Val do Salnés. This historic area is the most coastal subzone in the Rías Baixas winegrowing region, an appellation that was established by Rodri’s late grandfather, Francisco Méndez, in 1988, who was a blacksmith by trade as well as a winemaker. The name of Rodri’s winery (forjas means “forges”) is a nod to this other family specialty.

A firm believer in the power of simplicity, Rodri is dedicated to allowing his wines to tell their own origin stories. Since founding his winery in 2005, he has learned that by releasing control over the winemaking process, his wines can truly communicate where they come from, especially regarding their soils. With experience and practice, he has “lost the fear” of intense, high-acid Albariño—less aromatic and fruity than the popular styles—because his goal as a winemaker is to make wines that can age elegantly, and which never disguise their terroir with showy aromas.

Rodri’s winemaking approach may be simple, but his rigorous exploration of vineyard soil types forms the backbone of his work. The result is a collection of electric wines that are engaging, pure expressions of the diverse Salnés terroirs; a collection which manages to capture regional history in a way no other winemakers have done here. His embrace of historic techniques—some of which have scarcely been used since the “golden age of Albariño” came and went in the mid- 20th century—matches his passion for the ancient vineyards of Salnés. Like many in the “New Spain” winegrowing movement, Rodri studies and experiments with the methods his ancestors used prior to industrialization. Employing skin contact, foot-treading, extended lees contact with no batonnage, and working with different format and sizes of aging vessels, are all part of the toolkit he uses to show off many spectacular vineyard sites. Ultimately, these efforts allow him to tell the history of Rías Baixas and to communicate its terroir in a wise, faithful, and exemplary manner.

Rodri was surrounded by wine growing up in Rías Baixas, and although he spent some formative years playing professional indoor soccer, his background set him on the path to becoming one of the world’s experts on not only Albariño, but also the unsung red grapes of his region. He has accomplished this not through formal training, but rather through hands-on experience and his family ties. Rodri recalls that the first wine he ever drank came from the Sálvora vineyard, which sits in the center of his home village of Meaño, still owned by his family—a Méndez monopole. To this day, he says, “the person with the most influence on me was my grandfather,” who he joined in the vineyards by age 12. When Francisco passed away in 2001, Rodri found himself on his own, with an inherited collection of ancient vineyards, but missing his north star and mentor. Through a series of collaborations with other area winemakers, Rodri learned how to make red wines with the local varieties his grandfather sought to establish, while also helping produce innovative Albariño wines like Sketch, which became world-famous for its dramatic aging process under the sea. To this day, Rodri has continued to grow the red wine program at Bodegas Forjas del Salnés, helping to promote and revitalize several varieties (Caiño, Espadeiro, Loureiro, Brancellao) that were nearly lost forever. Through this work he continues his impressive family legacy, which he will pass on to his own family: Rodri has two young sons, Rodrigo and Raúl, with his wife, Ari. Just like Rodri at that age, they adore soccer, and can be found in the vineyards with him in their free time.

The Val do Salnés is home to over 60% of all Rías Baixas wine production, and the vast majority of that is Albariño. The most diverse of the five subzones, Salnés is full of small, fragmented vineyards and has the highest concentration of historical parcels in Rías Baixas, including ungrafted vines aged 100-200 years and older. According to Rodri, he has discovered that regardless of where you travel in Salnés, the climate is fairly consistent, meaning that the key difference here lies in the soil—a topic on which he is now the regional expert. Keeping this in mind, his practice requires strategically isolating vineyards by soil type and then vinifying them separately. If he likes the wine from a certain site after several years of aging in bottle, it will remain in his portfolio as a single vineyard bottling; otherwise, the site will contribute to either Leirana Albariño or Cíes, both of which are blends of multiple small parcels and which serve as calling cards for his two winemaking projects.

As a small, independent winegrower, Rodrigo Méndez has the flexibility to focus on individual vineyard sites in order to truly understand the soils of Salnés. Close to the ocean, the white clay and sandy soils tend to have a low pH, contributing volume and powdery minerality to the wines. These coastal vineyards have old vines, averaging around 40 years old. Further inland in the valley, which is where the most ancient vineyards are located, the granite soils are decomposed into a soil called sábrego, which “passes through your hands as if it were clay,” says Rodri. Granite soils give a concentrated, “vertical” sensation on the palate, and these valley vineyards are a little colder and lack southern exposure, giving the wines from this area higher acidity and lift. Finally, in the mountainous zone of Salnés, the vines are the youngest, at only 10-15 years old on average. The poor, rocky soils here make for stressed vines that are wiry and muscular, but with low yields. Rodri loves this area, once only accessible by donkey, and believes that in another two decades, this region will be famous for its excellent fruit. Throughout all three zones of Salnés, Rodri has discovered vineyards with a significant amount of quartz mixed with the granite and clay, and in a few special sites has encountered dune sand (known as áreas) and even gneiss, which behaves like a hybrid of slate and granite.

Regardless of the site, Rodri’s basic philosophies in the vineyard reflect his commitment to simplicity: he takes an organic and low-intervention farming approach that is informed by common sense, with no treatments (except copper and sulfur) used in the vineyards unless there is a serious risk of a vine dying without an intervention. Due to climate change, his work has evolved since he started in 2005: for instance, he never worried about excessive ground crops in the cool and rainy Galician climate, but now his team must manually weed most of the vineyard sites so that aggressive plants do not compete with the vines for nutrients and water. Today he still relies on a traditional method, pergola training, for his white grapes, as this permits excellent air flow required in the damp climate, but also good canopy growth to protect the white grapes from burning. For his red plantings, he has embraced a high-density, low-yield trellis system, which he believes will be the technique that will bring the new, higher-elevation mountain regions to the world stage in a few decades. This dual approach shows a commitment to protecting the past and its methods, but also his responsibility and care for the future. A mentor in the spirit of his own grandfather, Rodri has encouraged other young winemakers to explore the full possibilities of Salnés and all its complexity along with him.

Rodri’s signature winemaking style is direct and unfussy, inviting the Salnés terroir to shine like a beacon in the Galician fog. All his wines are fermented exclusively with indigenous yeasts instead of cultivated, which tend to mask terroir with overly fruity notes. Nearly all the wines (except Leirana) are fermented in wooden vats without temperature control, then aged in large wooden vessels of varying sizes and shapes, from 2,000L to 5,000 casks, foudres, and oval barrels that allow for natural movement without batonnage or racking. All the white wines see significant lees contact, with no malolactic fermentation, and minimal sulfur applied at bottling. The reds are fresh, elegant and have livelier floral and fruit aromas with more initial complexity than the whites, thanks to their slow elevage in large, used barrels. His approach to oak and this hands-off regimen for both whites and reds was inspired by the winemaking approach of Dona Lola, the owner of the Finca Genoveva vineyard and winery, where 200+ year old Albariño and Caino vines—and the shocking, “still-perfect-after-decades” wines they produced—changed his entire philosophy around 2008. Since then, Rodri’s singular winemaking goal is to produce wines that can age.

Rodri is passionate that Rías Baixas is entering a new “golden era,” a belief marked by his expansion from just 3 wines to 30 (18 whites, and 12 reds) across his two projects, Forjas del Salnés and his eponymous label, Rodrigo Méndez. The former is dedicated to exploring the broader Salnés region and incorporates both family-owned and long-contracted vineyards belonging to friends, while the latter is comprised exclusively of wines made from vineyards in his home village of Meaño. The total production across both labels is just 10,000 cases, with about half of that dedicated to Forjas del Salnés “Leirana” Albariño and Rodrigo Méndez “Cíes” Albariño, both of which are blends of multiple parcels. In addition to these projects, Rodri is experimenting with Pinot Noir in Pontevedra, and also consults with other winemakers in Rias Baixas (for instance, he and Alberto Orte produce Muti Albariño and Columna Albariño together), in mountainous Ribera Sacra.

70% of his production is dedicated to single-vineyard wines. Some of the gems from Bodegas Forjas del Salnés include:

Bodegas Forjas del Salnés and the Rodrigo Méndez wines have received tremendous worldwide acclaim, with top scores from every major domestic and European publication. On the international stage, Rodri’s wines are also featured in natural wine fairs like RAW, among others. Still a young winemaker in his prime, Rodri’s work allows wine lovers to watch history being made before their eyes. Through his dedication to small production winemaking, Rodri is creating a template for success not only for himself, but for future generations. His commitment to making wines that can age for decades, his embrace of red varietals, and his expansion into the mountainous zone, away from the touristy coast of Salnés, shows a dedication to the future that will establish Rías Baixas as a world-class winemaking region. Rodri learned by doing just how to be a Méndez; he now shows the world what it means to be one.